One of the reasons why I was so quiet recently is that I had to go on a job related field trip to Florence.
I was not very happy to do that, I hate this kind of professional obligations, particularly if this involves having to talk to sales people. This was the sales kick-off of the year, so I thought: “greeeeat” (the heavy irony of my tone should be clear).
I was moaning and complaining that I had to go to Florence, and I got back some snarky remarks: “How are you complaining?! You are going to fucking Florence!”.  I was not, I was going to stay put in a hotel for three days. Stuck with SALES PEOPLE.
Off I went, then. Fortunately, I was traveling with Ale, whose company I really enjoy. Prior to being an office rat like me, he was in the army! Surely, I thought, if he managed to survive in Afghanistan, I will be all right with him in Florence. I was right. He is one of those ones never affected by anything, so my level of stress throughout these few days was always very low.
We managed to arrive spot on time at the Amerigo Vespucci airport and without even dropping the bag we went to the convention hotel. We barely survived the afternoon, particularly when an English lady started to blabber about chairs and dolphins and giraffes trying to make the (ITALIAN) SALES understand what “inclusion” is through some

sort of very weird metaphoric performance. As you can imagine, that didn’t go down well with them.

We had woken at 4 AM, and we had been spinning around all day. I have a vague memory of going back to the hotel, taking a shower, and going back out for dinner.
Now, that dinner is the only reason why I am writing this post. At some point I will write a long and detailed review of my experiences in Tuscany, focused particularly on the food.
Now I will just limit myself and talk about that one dinner, that dinner that made the whole trip worth the pain in the butt of sharing a moment in space and time with Sales people (eck).
We went to this lovely Trattoria. A trattoria is like a restaurant, but with no pretension to be called that. It is supposed to serve very nice food at an also nice price. This one followed the standard of the best trattorias.
No-nonsense waiters, no- nonsense owners, a lot of embarrassing quotes from their clients. It is called Tito.

I might now mention that being an Italian in Florence is not exactly the same as being a non-Italian. It happens anywhere but particularly when you go to very touristic places; you don’t get the tourist treatment. Not entirely at least. They know they can’t rob you because you understand them. So they just try to rob you a little bit, something barely noticeable.
In this case, we proudly stepped in on the arm of not one, but two Florentine women. Nothing could go wrong! And it did not.
I could not take too many pictures, because I was too busy eating, but we had:
A couple of big plates with some “affettati” (ham, salame, etc.) and cheese (with their corresponding honey).
Some marinated garlic with sundried tomatoes. This was just delicious, and incredibly, it didn’t dance the conga in our stomachs and mouths all night.
A plate of little “bruschette” (Toasted Tuscan bread) with some delicious spreads that I can’t quite remember (on the menu I can read Liver, ragu’, parsley, tomato, sounds about right).
There might have been something else, but I think we contained ourselves with these few starters (laughs an evil laugh).As main, both me and ale had the Sliced beef with artichokes, or the famous “tagliata” (we didn’t feel brave enough for the Fiorentina steak).  Even on the English menu they specify: ONLY SERVED RARE. Please find below evidence that they don’t mess around with their meat (or “ciccia”, as they call it).

We were so full we couldn’t even have dessert, so we just had some lovely, homemade, limoncello.
After that we were basically ready for bed.
Since the hotel was in the centre (ish), we decided to go home walking through the city center, having a look at that Duomo of theirs before curling up in bed watching the Spanish program during which they decide which crap artist to send to Eurovision.
I will leave you then with some bits of wisdom from the customers of the Trattoria: 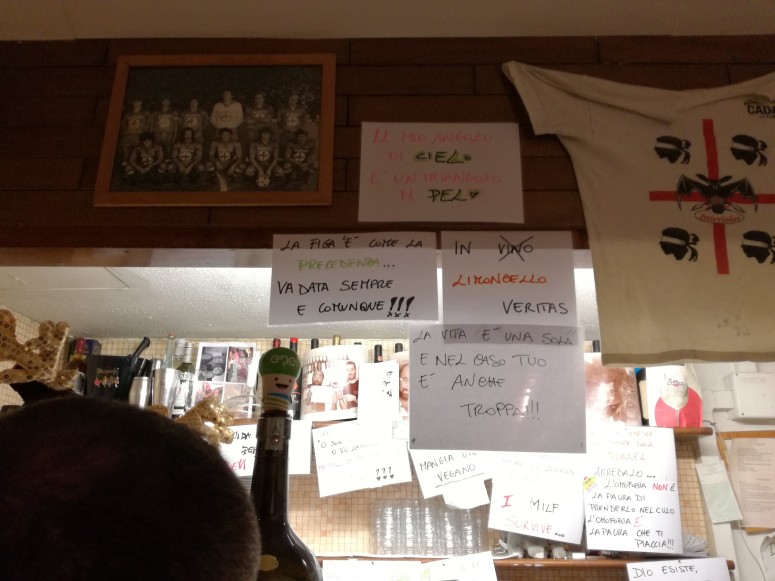 “My corner of the sky is a triangle of hair” (you really don’t want to know about this one, but in Italian at least it rhymes)
“Life is only one, and in your case it’s already too much!”
“In Limoncello veritas”
“The pussy is like the right of way, you always have to give it” (another subtle and deeply Italian adage that you really don’t want to stop thinking about too much)
“Save a plant, eat a vegan” (finally one that makes sense)

Parliamo di… We talk about…

Baking the World a Better Place

I want to be rich. Rich in love, rich in health, rich in laughter, rich in adventure and rich in knowledge. You?