Last week I wasn’t here so I couldn’t post anything. Where was I, you ask? In Portugal, my dears!
If you know me, you know how much I love this country. I discovered it living in Spain, when with a couple of friends we went to Sagres for a camping trip (first and last of my life). The beauty of the country struck me back then. That, and its amazing and incredibly underrated gastronomy.

Back to last week. The official excuse for my trip was a visit to my friend Marisa, who lives near Aveiro. The unofficial reason was that of showing Sergeant Lunch Porto and to eat like there was going to be no tomorrow. All the abovementioned objectives were completed with flying colours and what follows is a recollection of our gastronomic experience.

Please be advised, you won’t find here many touristic tips, just a description of what we ate, and my impression of that. Also, this first part will be much more predictable. Porto is lovely but hopefully, by now, their gastronomic treasures are well known. 🙂

I have already been to Porto a number of times. This city never fails to deliver the expectations. This time around, we were sleeping in a very nice apartment next to the Ribeira, with views over the stunning Luis I bridge. After arriving late on the first night, we were up and about early-ish next morning. Our main objective for the morning was to eat a Francesinha avoiding queues. We made it! If you want to be seated and eating in less than half an hour at the Café Santiago (one of the prominent Francesinha-serving cafés in the city), you have to make a big sacrifice and be there for an early lunch-late breakfast. At 11.30, there is almost no one around (well, some Americans, some Japanese, and you) so you can enjoy the big sandwich in peace. If you don’t know what a Francesinha is, you can go here and find out. I am reasonably sure you will like it. 🙂 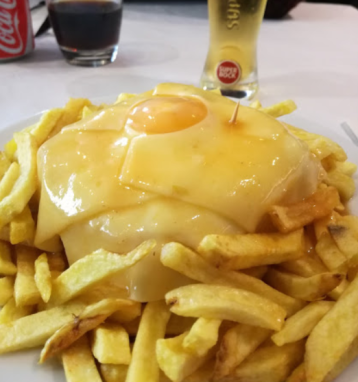 After that, full with egg, cheese and meat, we went down to the river. You must know that Porto is a lovely city, but be prepared, you will have to walk and climb steep stairs and streets. The city centre is on top of a hill, and the Ribeira, with the Douro River, the Porto cellars and the beautiful views is of course at sea level. With a Francesinha in your belly, though, you will have fuel enough for everything, do not worry!
In order to reach the cellars area, you need to cross the aforementioned Louis I bridge. The opposite side of the river does not belong to the Porto municipality, but it’s another town called Vila Nova de Gaia. Apparently, all the cellars are there because the temperature and the general conditions are better for the wine. If they say so… 😉
We went to two cellars, Ramos Pinto and Quinta dos Corvos. We avoided all the English ones on purpose, sorry about that. I remembered the visit to the Ramos Pinto was interesting, mainly because Adriano Ramos Pinto was probably one of the first marketing geniuses of the modern age. His adverts and posters were famous because they were polemic, and you probably remember one of them from Monica’s house in Friends:

Nerd remarks apart, the visit is always enjoyable and you get to taste two glasses of White and Tawny Port at the end of the tour (10 eur). After the second glass everyone is a wine connoisseur, and you can’t just stop tasting just yet. So, we went on to the next cellar, Quinta dos Corvos, where I had already had a lovely time with my friends back in February (when I say lovely time, read the Port went straight to our heads and we acted silly for a while). For seven euro, we were once again showed around and we ended up having four (or five? It’s difficult to count after a while, tasting wine is such a hard profession) types of Port. Definitely, I like Tawny Port (which is a red

Port is aged in a small cask, while the Ruby is fruitier and sweeter since it’s aged in a big tank, losing the flavours that the wood gives to Tawnies). After a nice and refreshing walk, we ended up having dinner in a very standard Portuguese restaurant. Nonetheless, it was nice: we had lovely sardines and clams. And bread, oh so nice bread (it’s the thing that I miss the most up here). The only negative aspect of the dinner? The very whiny couple of Frenchies sitting next to us.

Next morning, we decided to have a sweet breakfast (we = I, since Sergeant Lunch doesn’t really care about breakfasts, but he’s too nice and he loves food too much to say no to trying new stuff). In February, I had already bought an entire book about Portuguese baked goods (in

Portuguese, of course). They love eggs, and the products are always very yellowy, very eggy. Of course, I adore them. Their croissants are more like a brioche, and their custard donuts are something out of the ordinary. They loooove custard. That is why the product everyone knows is Pastéis de Belém (known, outside of Belém in Lisbon, where they are from, as Pastéis de Nata). They are lovely little custard tarts with puff pastry. That’s it. And they are one of the most delicious things I’ve ever had. That morning, we had Pastéis de Nata, lattes (coffee is so nice as well, if you are into it you need to try Portuguese coffee!) and a Bola de Berlim (custard donut), plus an orange juice each. We were so full we were barely able to roll out of the bar (a random, very Portuguese, little bar/bakery next to the Batalha funicular station). In that state, with sugar pouring out of our eyes, we then proceeded to take the train to Aveiro.

That is me in front of a Francesinha. You can't see it, but happiness is written all over my face. View all posts by capitancolazione