We left Yufuin sad to leave our lovely apartment and a little pissed off at our suitcase, that decided to abandon us just after barely a week. One of its wheels just gave up and from then on it had to be dragged with a considerable amount of effort whenever we had to change city. Needless to say it happened a little bit too early.

Anyway, we took the train and rode through the lovely, green, lush Japanese countryside to Hakata Station, in Fukuoka. The station is so called because it is located in the ward bearing the same name, which used to be a city of its own. In the XIX century the two cities of Hakata and Fukuoka were merged, but still nowadays some important parts of the city, such as the station, keep the name of the old port.

We got to the city a little earlier than expected and we decided to give it a try and find our AirBnb. It was fairly easy to find its location following the host’s instructions, but then we saw ourselves in front of this tiny house, ringing the bell with no one answering (even though there was clearly someone in). Captain Lunch just saw that the door was open and went in. He found crazy cat lady Megumi, our host, whose English was wobbly but who was so nice that we didn’t care much. She showed us her doggie and her cat (she literally brought the cat out on a chair for us to see (needless to say, I loved it) and then she brought us to the tiniest flat I’ve ever seen. It was not bad, but I must say that it was veeeeery small.

After this quite absurd and charming moment, we went for lunch. And what a nice lunch that was! We went to Canal City, in the centre, a very special shopping centre that looks more like Tomorrowland than an actual place in an actual city. In the food court, there’s the Ramen Stadium. Where you can eat all the different types of ramen from the different regions in Japan. For real! We went for a classic one because we wanted to try the local specialty, Tonkotsu Ramen, a pork-based ramen that makes me salivate just thinking about it.

While digesting after this lovely meal, we walked lazily around Canal City and we headed for the city centre, not really looking at the map. We went through the “dodgy” area nearby (in Japan there’s really no dodgy areas, but this was slightly sleazier than the

rest of the city) and walked in the general direction of a bar, which we couldn’t find (since we had no idea where to look for it in the first place). We found some sort of English pub that was awful, and crying desperately “HUB, where art thou?” we decided it was a good idea to go for a karaoke. Finally, Karaoke! The first time around (more about karaoke later!) we only had a couple of hours to kill, and we fumbled with the controls, the mics and the paraphernalia for a good ten minutes, so by the time we were starting to warm up it was over. When we got out, we could distinctly hear a group of ten(ish) men screaming at the top of their lungs from a room nearby. I think they were having lots of fun (and adult refreshments) 🙂

For dinner, we wobbled to a very typical Fukuoka food stall, or Yatai, after a stop at the arcades (where we tried, with no luck, to get a doll from a UFO machine for what seemed like a long time). Now, we did not go to the place along the river where all the stalls are, since we were in the modern part of the city. There were three or four all around a corner, and we sat down at the first one with available seats. I was so ravenous I forgot to take a picture of the food, which again was ramen and something else I can’t remember. I took a picture of a cute plate though, because I sometimes got very distracted by kawaii things in Japan.

The second day dawned beautiful and very, very hot. We slept in and went for a lovely breakfast on the banks of the lake in Ohori Park, that was very close to our matchbox apartment.

After a brief walk in the park, we visited the city’s aquarium. It was nice, we saw dolphins and especially, we managed to stay out of the heat during the worst time of the day. When we headed back to Hakata Station, we decided that we had to try the local burger chain, Mos Burger. Delicious, like everything Japanese people make 🙂

We headed then straight for the next sight, which was the the Fukuoka Tower. 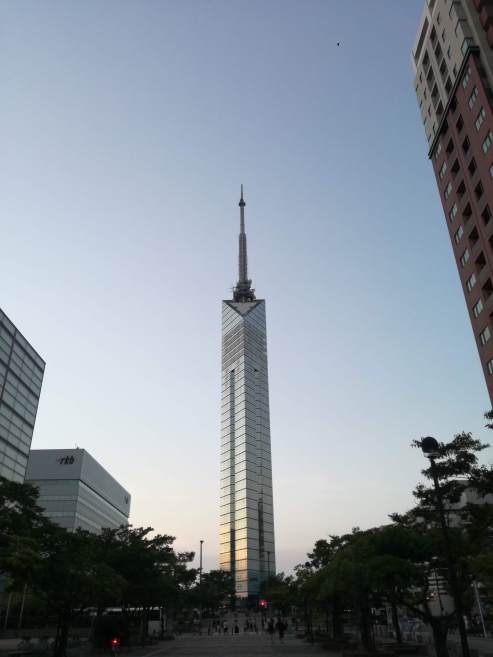 Radio tower placed basically on the beach, it grants a breath-taking view of the bay and the city. We were there at dusk, making the experience even more memorable. Pity I fear heights, so I was crawling along the windows of the tower like a crab trying to avoid thinking how high we were. I still took some pictures though! 😀

Once safely back down, we had a lovely ice cream while sitting placidly close to the beach, watching a group of children playing football and smelling the food being prepared in all the little seaside restaurants also overlooking the bay. Since we had had our burger very late (thanks to the adult refreshments of the previous day, we had slightly funny bellies), we were not hungry. We decided to go back to Ohori Park and have a beer sitting near the lake, watching joggers run by and people bringing out their doggies for a pee. It was a delightful ending for the two days in Fukuoka.

Bonus Pictures: At the Arcades, playing a train simulator (not kidding) and a real life Space Invaders 😀 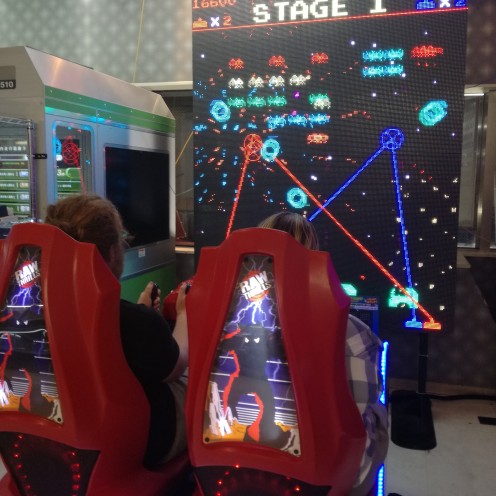 Baking the World a Better Place

I want to be rich. Rich in love, rich in health, rich in laughter, rich in adventure and rich in knowledge. You?